🌬️Eric Douglas Alexander was born in Frankfort, Indiana in 1982. Raised in the rock and roll tradition, they took the stage with their family at the age of four. While studying music at Ball State University from 2001 to 2005 they contributed to recordings from ...revel in the morning, Everything, Now!, and Clearance. They also produced Some Kind of Sex as a solo artist. While residing primarily in Bloomington, IN they continued to tour with Everything, Now!, and contributed to recordings by Hot Fighter #1. They left E,N! in 2009. They remained in Bloomington until 2018, contributing to recordings by Normanoak, Trance Dancer, and ABC Gum while also producing solo records as Brother Dolphin, Sir Deja Doog, and Eric Douglas Alexander. Fae are now a simple pig, the faeroine of faer own made up story.🧙🏿‍♂️ 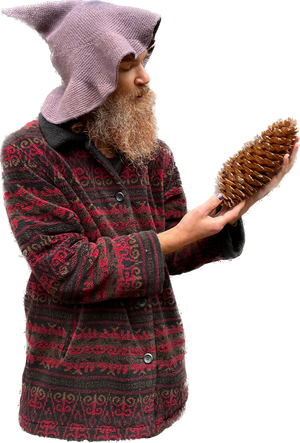 🌬️One day, while living in the mountains of Northern California, pig met a couple of wandering Christian mystics. Fae took the mystics in for the night, and the three of them swapped stories over a simple meal. The two Christians claimed to have hiked the entire Pacific Coast of the United States over a period of seven years. A simple pig was so intrigued, as fae faemself had spent the previous three years in solitude as a mode of spiritual retreat, that fae decided to take on The Hike for faemself as a sort of pilgrimage. Two months later fae sniffed the fence between San Diego and Tijuana. It was delightful. Fae then proceeded to hike northward along the beach. Fae lived with only a guitar, a recording device, the clothes on faer back, and a few essentials for survival🧙🏿‍♂️

🌬️A simple pig stopped The Hike a few miles south of Ragged Point in central California in order to present a demonstration of infinite ignorance at performances around the United States in the summer of 2022. The Hike will continue in segments whenever the Artist feels it is needed.🧙🏿‍♂️